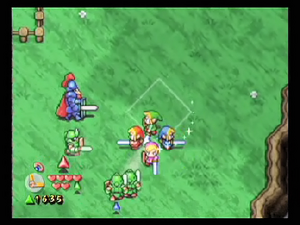 Tingle's Tower is where you can play multiplayer games with two to four players. You can find it in the Hyrulean Adventure. Here is a list of some of the games.

Level 1: Whereabouts of the Wind

This article is a stub. You can help Gamecube Wiki by expanding it.

Retrieved from "https://gamecube.fandom.com/wiki/The_Legend_of_Zelda:_Four_Swords_Adventures?oldid=4682"
Community content is available under CC-BY-SA unless otherwise noted.